7 Warnings Before Giving Your Baby Coca-Cola 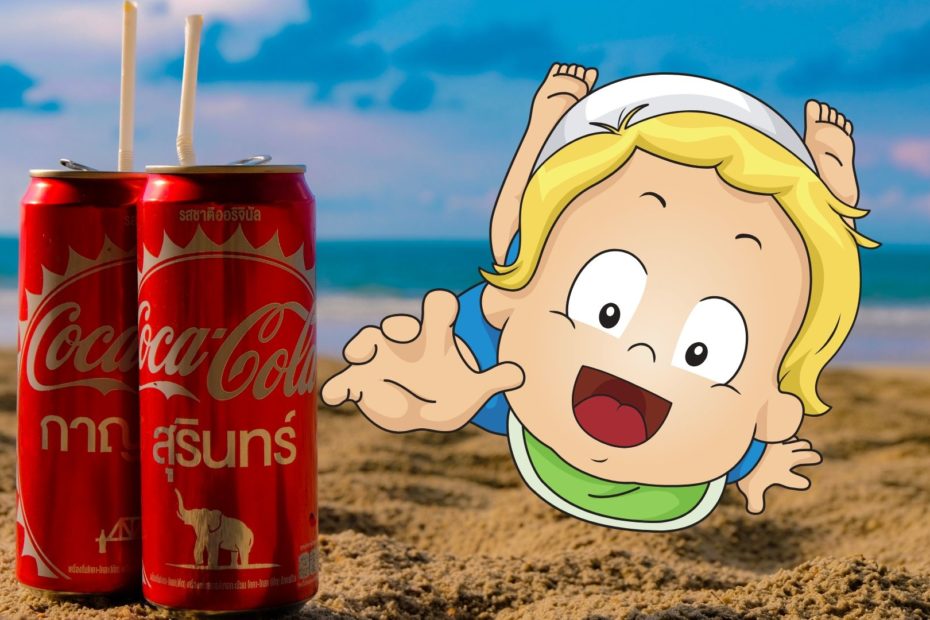 Can my baby drink Coca-Cola?

I was speaking with a co-worker recently who recently became a new father. The subject of feeding babies came up. We talked about fruit and vegetable juices, but then he asked me: Can I give my baby Coca Cola?

Then it occurred to me: I had never considered the subject before because it is commonly viewed as being junk food.

Or that is to say, it is not really food…

When you break it down, sodas such as Coca Cola are extremely high in sugar and fruit acids. There are 39 grams of sugar in the average can of Coca Cola!

That is over 9 teaspoons of sugar per can. This alone can affect your baby’s teeth, but there is also an acid in Coca Cola known as Phosphoric Acid.

This can lead to cavities in the enamel of the tooth. This can pose a problem for your baby’s developing and emerging teeth.

If you find yourself asking: can I give my baby Coca Cola, try to look at the question sensibly.

Coca Cola simply has no vitamins or nutrients because it is not food.

Carbonated drinks, or sodas, have no fiber, no vitamin C, and no Calcium. Put simply, giving your baby Coke offers nothing of value.

However, everyone is going to resort to what they feel is ultimately best to do for their baby, but keep moderation in mind.

Is your child having difficulty concentrating, sitting still, or other behavioral problems? If you are giving your baby soda, such as Coca Cola, then your caffeinated beverage may be to blame.

If your question concerning giving Coca Cola to your baby is out of concern for the amount of caffeine per can, you’re on the right track. One can of Coca Cola contains almost 10% of the maximum allowed intake per day of caffeine!

Can I give my baby Coca Cola if it is caffeine or sugar-free? Knowing that caffeine and sugar can both be bad for your baby’s health, it is logical that cutting them out of soda would make the soda acceptable to drink.

Phosphoric acid makes it difficult for calcium, zinc, and magnesium to be absorbed. These minerals are crucial for proper bone development.

Consider your baby’s health when contemplating providing your baby with soda. Now that you know it may cause your baby to gain weight and/or become addictive, why take the risk?

What about in small amounts?

Some of you may even be thinking about only giving small amounts of Coca Cola to your baby. It’s not a large amount after all, right?

It’s inappropriate to give your baby even a drop of soda.

Coca Cola can increase levels of dopamine. This is a naturally occurring chemical in the brain that is responsible for pleasure and feeling good.

It is similar to how heroin behaves. And interestingly, just like heroin, Coca Cola can also be quite addictive.

There is nothing quite like a baby crying for some soda when it is denied having more. Each serving of Coca Cola contains the maximum amount of sugar that an adult is cautioned against consuming in a single day.

Unfortunately, the sudden increase in energy (hyperactivity) and feeling good (dopamine) will ultimately cause your baby to crash.

Normally, the minerals magnesium, calcium and zinc would be absorbed into your bones.

Instead, they are being passed out of your baby’s body through the urine. Through urine, your baby will be expelling any sodium and electrolytes that are required for the body to stay properly functioning.

Put simply, this is what’s happening: due to caffeine, your baby starts to feel exhausted after drinking Coca Cola. Since caffeine encourages urine production, any hydrating fluids (such as water) that were ingested during the day will be excreted through urine. This will leave your baby thirsty and probably crying for another Coca Cola upon waking.

Staying healthy is a difficult task, but if we learn healthy habits early on it becomes easier to maintain as we grow older.

Drinking sodas is simply very bad for your health. Before giving your baby Coca Cola, think about diabetes. A recent study discovered that 184,000 deaths happen every single year because of drinking beverages that contain large amounts of sugar.

Within 40 minutes of consuming a can of Coca-Cola, one’s blood pressure has increased and his/her pupils have dilated due to the caffeine.

There are also salts in the soda and babies can barely tolerate sodium.

The sugar content is so high that it ought to cause one to feel like throwing up. To counteract this, manufacturers add phosphoric acid to Coca-Cola to counter this strong sugar taste.

Sadly, all of that excess sugar is turned into fat by the liver.

Studies also show that drinking sugary drinks, such as Coca Cola, have a direct impact on the amount of time that one sleeps and the quality of the sleep itself.

Is your baby not sleeping well? Maybe you should cut out the Coca Cola.

6. Will feeding your baby Coca-Cola impact his sleep schedule?

Absolutely! Feeding your baby Coca-Cola can have an impact on his sleep schedule. But, unfortunately, many parents feed their baby Coca-Cola without even considering that it may totally impact your baby for days to come.

Your baby’s diet will impact their sleep quality. Therefore, it is highly recommended to use this specific baby sleep schedule on nights your baby consumes Coca-Cola.

7. Can Coca-Cola cause your baby to have nightmares?