Why Do Babies Hiccup? 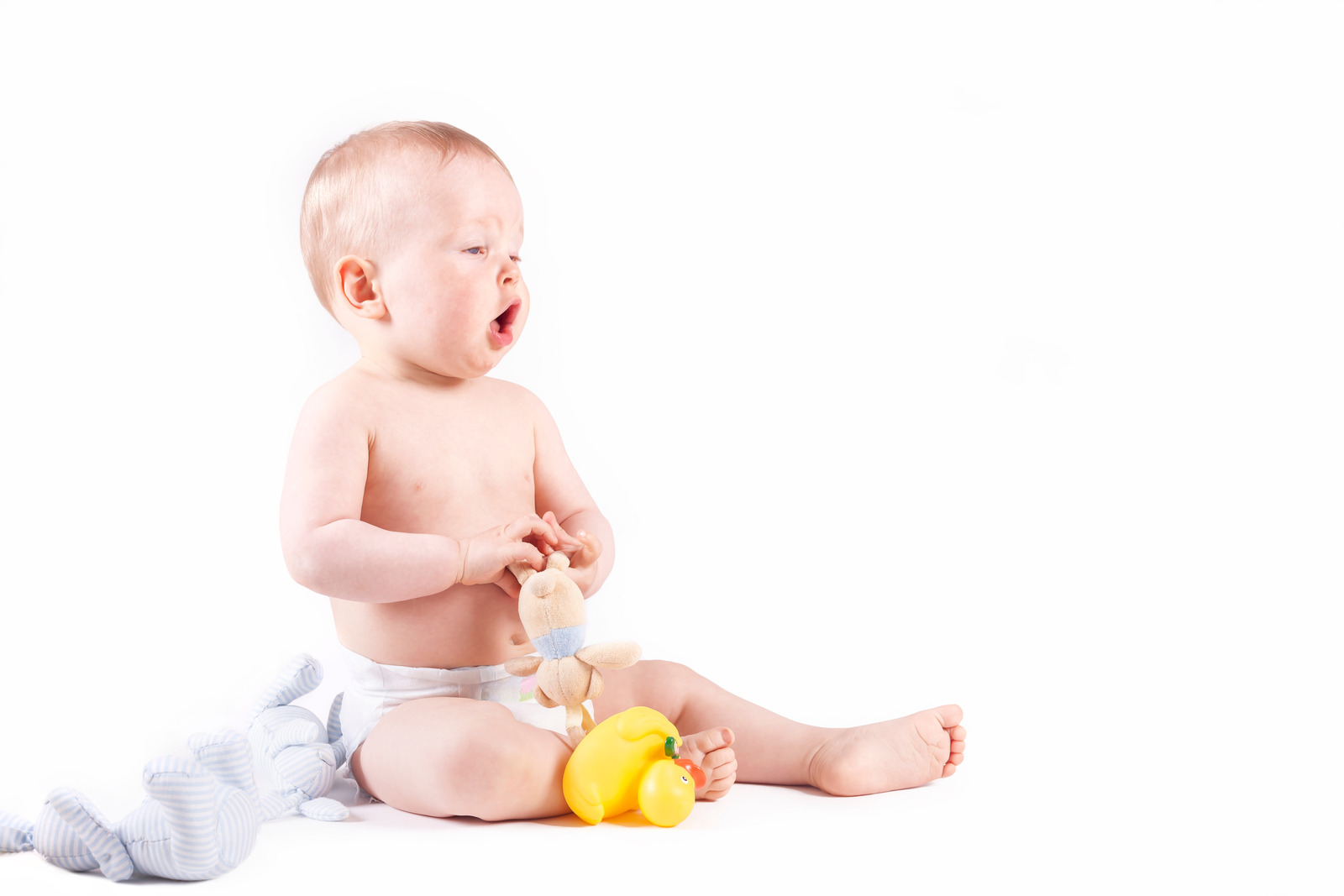 Why Do Babies Hiccup?

The mechanics of a hiccup are complicated for both adults and babies, but just about anyone on earth would agree that a baby hiccup is by far more fascinating and cute than an adult hiccup. Sometime in the first year of life, your baby will let out that first audible hiccup that will inevitably be followed by a chorus of “awws” from all who are near enough to hear it. That’s the simple part. The more complicated part is why babies hiccup. It’s the diaphragm’s contracting that forces air out through the mouth, and if the vocal chords are are closed when this happen, a hiccup ensues. And then, the chorus of “awws” ensue.

A major theory as to why babies hiccup is that a hiccup helps to get rid of pesky excess air in the stomach and relieves some of the pressure from that particular condition. The truth is, though, that even medical professionals aren’t completely sure if this reflex is a necessary one for your baby. So for now, why babies hiccup is less important as to acknowledging that they do indeed hiccup during their first year of life. It happens! Hiccups are endlessly adorable in newborns and only become a problem if they’re too frequent for both parent and baby.

Think of the worst case of hiccups you’ve ever had. Chances are that even as bad as those hiccups were, they didn’t do anything except mildly inconvenience you for a while and send you running to the kitchen looking for easy answers. Your baby’s hiccups will likely be about as serious as your own, so keep it lighthearted!

Babies love milk, and eventually, they’ll turn to other foods, so it’s natural that foods seem to inspire this hiccup reflex in babies. If you’re looking for a theory of your own as to why babies hiccup, you might begin with the life-giving subject of food for babies. That’s one of the primary things that might seem to make a bout of hiccups appear from your infant. Just like adults sometimes drink too fast and find themselves hiccuping, the same holds true for infants. A meal consumed too fast or overeating might inspire a bout of hiccups in your newborn. While this knowledge doesn’t explain why babies hiccup, it sufficiently explains the practical action that causes them.

Let’s say it’s a particularly hungry day for your baby. They eat a bit more than usual at feeding time, and you might let them because eating is a healthy thing to do. After all, they’ve skipped a meal or not eaten very much at their last one. After you finish feeding your baby, you expect the traditional burp, but this time you notice a cute hiccup. That’s perfectly natural! Hiccups, just like burping, have to do with air or the idea of swallowing “too much” air. If your baby hiccups, there’s nothing to be alarmed about.

Some foods can also help your baby stop hiccuping if it becomes too much of a problem. A special herb-blended type of water – typically used in cases of colic – is called gripe water, and depending on how old your baby is, this gripe water can really help to clear out the old hiccups, too. There is no scientific evidence that Gripe Water helps this particular ailment, but since it’s harmless, it also might not hurt. Speak to your pediatrician about it first! It’s readily available online and sometimes even in stores depending on where you live. If it works, great. If it doesn’t, hiccups aren’t usually a threatening medical condition, so no harm done.

Does Why Babies Hiccup Matter?

This is a question the medical community has been asking for years, and the truth is that it’s not all that important. Why babies hiccup isn’t going to solve any major health issue for an infant. It’s one of those harmless things that infants do just like their parents. You’ve probably gone your whole life up until now and not even known what causes a hiccup or what purpose it serves. This will in no way affect the quality of your life, and if you did know why you hiccuped, it probably wouldn’t improve your life at all anyway.

Curiosity is a human quality, though, and if you found yourself on this subject because of your natural curiosity, it’s worth saying that this is an absolutely fascinating subject. There are so many functions of the human body that begin in infancy, and when people have children, they wonder about things like this. It’s natural to ask yourself why babies hiccup, but like all answers inspired by curiosity, it’s not going to matter if you never formulate a theory as to why babies hiccup.

If you have a baby who is just constantly getting hiccups, it’s possible that your baby is consuming milk too quickly or eating too much at meals. You can cut out this unwanted behavior – especially if your baby is spooked by hiccups – by trying to get baby to slow down while they’re eating or by attempting smaller, more frequent feedings for a while until the hiccups settle down a bit. There will always be that adorable first hiccup, and it’s going to be a super cute moment, but for the most part parents and children alike like to avoid hiccups when possible.

The only reason you should speak to your doctor is if your baby just gets hiccups almost every day and you feel it’s excessive. Parents usually have a good feel for what’s “normal” for their babies. If you feel like your baby is just hiccuping so much that it’s interfering in feedings and other activities, casually mention it to your pediatrician. You won’t be the first parent who’s broached the subject with a doctor. And perhaps your doctor can give you some tips for curbing hiccups or even let you know their own theory for why babies hiccup.

How To Cut Down On Hiccups

The aforementioned solution is going to be a great way to cut down on y our baby’s hiccups. Sure, it doesn’t tell you why babies hiccup, like the true meaning behind the function, but it will serve the practical purpose of helping your baby stop getting hiccups so much. Another great way to reduce hiccups for your baby is to give them a pacifier. This practical tip helps to reduce the amount of air that the baby is taking in, so it might just stop those pesky hiccups before they get too out of control.

Remember, babies who can smile and laugh will often be amused by these first hiccups, so if your baby has hiccups and thinks it’s kind of neat, there’s nothing wrong with that. There’s nothing inherently dangerous or threatening about hiccups. They’re just one of those interesting things people get from time to time, and the truth is, hiccups will probably bother you a little more than they bother your baby. Some babies might have an issue, though, so if you have a baby that routinely gets spooked by their hiccups, trying those three simple tips will help you cut down on the frequency of your baby’s hiccups.

Why babies hiccup will likely always be a mystery to both you and the medical community. Mysteries are fun but sometimes they’re just not solvable. You now know why babies hiccup, in the physical sense, but you don’t know the true goal of the hiccup in the babies life. The most common theory for why babies hiccup is that it really is to remove excess air from the tummy, so if that explanation suits you, it’s fine to stick with it! Anyone who comes up with a theory of their own is doing better than the medical community because this isn’t an issue that they’ve spent a great deal of time on.

If your baby hiccups, stay calm, enjoy the adorableness of it, and march on. The hiccups will usually only last for a little while, amuse or spook your baby a bit, and then disappear as quickly as they arrived. You don’t necessarily have to know why babies hiccup to truly enjoy that lighthearted moment with your baby. Sometimes a baby may even laugh or smile at their own hiccups. It’s one of those rich moments with your child, learning new things along with them and enjoy the little things in life each day. If your baby thinks hiccups are hilarious, that’s fine. Your baby has a lot in common with millions of other babies who will find this exercise amusing.

previousWhen to Transition to Toddler Bed
nextWhy Do Babies Spit Up?

1 thought on “Why Do Babies Hiccup?”