Sleeping with Newborn on Couch: What to Know 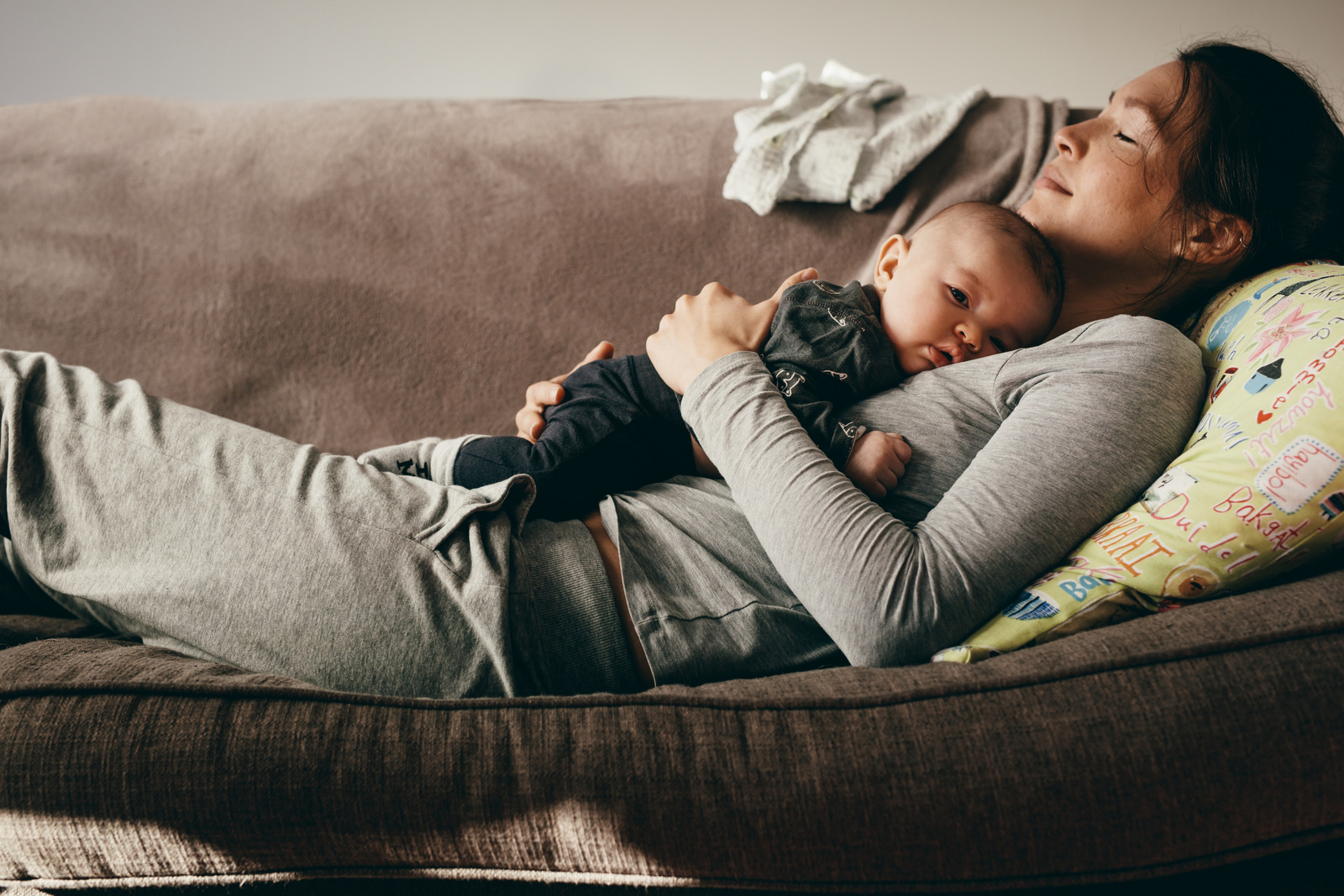 Sleeping with Newborn on Couch?

This is, unfortunately, a fear that every parent must cope with. If you’ve spent sleepless nights obsessively checking on your new baby, rest assured you aren’t alone. Sudden Infant Death Syndrome (SIDS) refers to the death of an otherwise healthy infant under a year old, and the fear that their little one will succumb to this tragic condition haunts the nightmares of many new parents. Although SIDS can strike even the most careful of families, there are precautions you can take to significantly reduce the risk of SIDS or other potentially fatal accidents while your baby sleeps.

Tips for Putting a Baby to Sleep Safely

Regardless of where baby sleeps, following these tried and true methods for safe sleep will reduce your baby’s risk of SIDS and other accidents.

Babies Should Always Sleep on Their Backs.

Babies falling asleep on their sides or on their stomachs is associated with SIDS. Your baby could turn their face into the bedding or could otherwise re-inhale carbon dioxide while sleeping, which can be deadly.

Never Smoke Inside the House

Cigarette smoke has been shown to increase the risk of SIDS in infants. It should go without saying that one should never smoke around infants or children or inside a house where babies live. If anyone who lives in the house with a newborn is a smoker, they should make every possible attempt to quit, as second-hand smoke also poses a risk to newborns.

Put Your Baby to Sleep on a Firm Surface

Soft surfaces and bedding pose a risk to babies during sleep because they increase the risk that a baby will suffocate if their face gets too close to it.

Don’t Line the Crib with Bumpers

Experts have warned parents against the use of crib liners because of their association with an increased risk of SIDS. If you want to use them for decoration, be sure to remove them from the crib before putting your baby to sleep.

Don’t Forget to Remove All Hazards

Babies should never be put to sleep in a crib (or anywhere) with pillows, fluffy blankets, stuffed animals, or anything else that might fall over a baby’s face and obstruct their breathing. Sheets should fit tightly over the mattress to prevent them from getting loose.

Letting your baby sleep in the same room with you for the first 6 months has been shown to reduce the risk of SIDS by as much as 50%. Bringing your baby’s crib into your room is the simplest way to do this, but there are other co-sleeping options available.

Put Your Baby to Sleep with a Pacifier

Although doctors aren’t entirely sure why, allowing your baby to sleep with a pacifier also reduces the risk of SIDS. As a plus, your baby will be able to suckle, which can help them sleep better and for longer periods of time.

What Is the Most Common Mistake Parents Make?

One of the most common factors in SIDS and accidental death in newborns is parents accidentally falling asleep with their newborn in an unsafe place. This usually occurs when exhausted parents end up sleeping with their newborn on the couch or in a bed that isn’t suitable for infants. We’ve all been there: your newborn wakes up hungry in the middle of the night, and so you bring them to the couch with your nursing pillow or into bed with you for just a few minutes. Before you know it, you’re dozing off together. Falling asleep with your baby is a beautiful and natural thing! However, sleeping with your newborn on the couch is extremely dangerous for a number of reasons.

What’s Wrong with Sleeping with a Newborn on the Couch?

In short, sleeping with a newborn on the couch violates just about every recommendation that experts have put forth for preventing SIDS in infants. It also carries risks for other accidents that could be fatal to young babies.

How Can You Prevent Accidents from Sleeping with Your Newborn on the Couch?

If you decide to take your baby to the couch with you, don’t lie down, and pay attention to your own levels of sleepiness. Whenever you start to feel sleepy and aren’t yet able to put your baby back in their crib, it’s safer to move to a bed than to run the risk of dozing off and sleeping with your newborn on the couch. However, sleeping with your baby in an adult bed is controversial and should be done with caution. All recommendations detailed above for a safe sleep environment should continue to be followed (remove pillows, blankets, loose-fitting sheets, etc.), as well as a few additional precautions. While sleeping with your baby on the bed may not always be ideal, if done correctly it is still safer than sleeping with a newborn on a couch.

Don’t Do It If You Aren’t Breastfeeding

Babies who are not breastfeeding should never sleep in bed with their parents. If you aren’t breastfeeding and are worried about dozing off and sleeping with your newborn on the couch, it’s better to put them in their crib than in your bed.

When a newborn is sleeping in bed with their parents, it isn’t safe for older siblings to share the bed at the same time.

No Drugs or Alcohol

Whether they are legal or illegal, sleeping with your baby anywhere while under the influence of drugs or alcohol is extremely dangerous, as it could impede your ability to wake up in an emergency.

Don’t wear any clothing that has long strings or ribbons attached, and if you have long hair, make sure you tie it up securely to prevent it from getting wrapped around your baby’s neck or other appendages.

If you are extremely obese or otherwise have trouble feeling where your baby is in bed with you, then it’s best not to share a bed with your baby. The same is true if you are a heavy sleeper or suffer from conditions like sleep apnea.

Taking Precautions Could Save Your Baby’s Life

Having a delicate newborn at home is one of the most beautiful experiences anyone could ever have, but it can also be stressful. You’re bound to be exhausted, so it’s important to read up on safety tips in order to avoid potentially deadly mistakes. You have a lot of options when it comes to putting your baby to sleep, but sleeping with a newborn on the couch is never a good idea. Practicing safe sleeping habits is the best way to make sure that you and your baby get a good night’s sleep.