How to Establish a Newborn Feeding Schedule 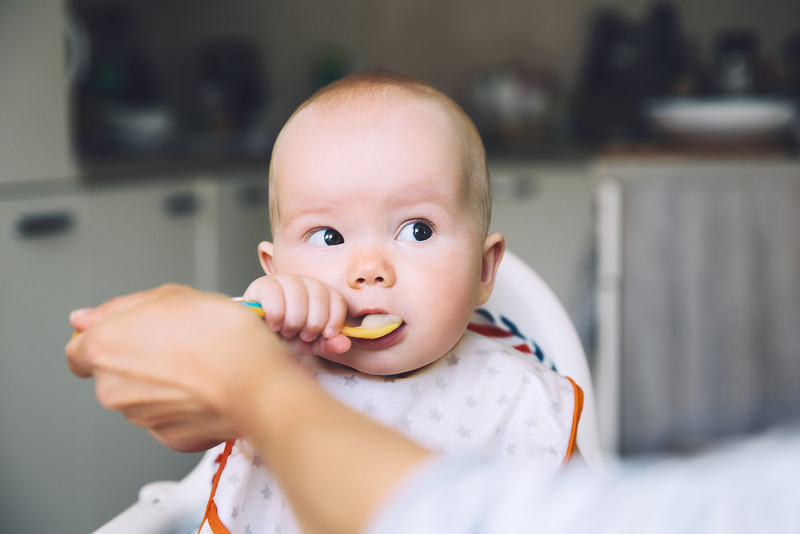 Scheduling feeds for a newborn baby is among the most challenging tasks for mothers. The ever-changing guides and nutritional intake adds up to the problem because parents are unable to make a decision. Often, new mothers resort to the Internet to get help for the newborn feeding schedule, which results in more confusion.

For first-time mothers, it is important to remember that your baby can survive solely on milk and liquid in the first six months. Depending on the lifestyle and family preference, it’s not uncommon for mothers to feed their babies solid food before they are six months old. While it may feel strange but your baby is naturally well-equipped to survive on milk during early months.

It is also critical to remember that feeding solid food in the first few months can cause choking hazard because the digestive system of a baby is still in the development stage. As a result, parents should always ask a pediatrician before giving any solid food to the baby instead of listening to their moms.

Here are important guidelines that will help you understand the dynamics of milk and solid food:

At this stage, an average baby requires about 4 ounces of breastfeeding on each feeding. A mother may be required to breastfeed six to seven times a day to complete the dietary requirements of the newborn. If you’re giving formula milk, the intake can be as much as 30 ounces of milk on a daily basis, which is completed by serving the baby seven times every day.

For mothers on formula milk, they should also follow these natural guidelines. Instead of feeding 4 ounces to a week old child, they can start with 2 ounces on every feed and continue increasing it until the baby is taking 4 ounces by the end of the first month.

A newborn will always let you know once they’re hungry by crying. You should also avoid giving solid food to a newborn during the first month.

For most mothers, it’s often confusing to understand why babies don’t require extra milk compared to their first month. The observation is based on the fact that the daily feed and feed per session of babies during this stage rarely increases. For instance, your baby will only require 4 to 5 ounces of milk per session until they are 4 months old. The total amount of milk consumed on a daily basis increases from 30 ounces in the first month to 36 ounces until the third month.

The reason for such a minor difference in milk intake is growth pattern in the first few months. In the first month, the baby develops more quickly than in subsequent months, which means that its demand for calories is also greater. In the second and third month, the newborn feeding schedule remains somewhat identical to the first month because the body starts to grow at a lesser pace than the first month.

During these months, it is recommended that mothers should keep following newborn feeding schedule similar to the first month. The only difference is a slight increase in feeding on 4 ounces per session to 5 ounces per session, when required.

Sometimes your baby may feel an urge to consume more feed, which is also a natural process known as a growth spurt. During these growth spurts, babies have the tendency to grow quickly compared to other times. It’s during these times of growth spurts the baby demands more food than what’s normally consumed.

These are the months when babies are getting used to their new environment. They don’t cry for feed often and mothers also feel much relaxed. At this stage, the body develops at a slower rate than the first three months, which also means that mother may only need to feed babies five times a day instead of 6 to 7 sessions they were used to.

Interestingly, the total milk consumption of a baby also diminishes to some extent. Mothers following a strict newborn feeding schedule may only require five sessions with their babies who will consume 4 to 6 ounces per feeding session. Overall, the milk consumption may decrease from 36 ounces to maximum of 30 ounces per session.

This is a normal reaction of the baby to adapt to its environment; therefore mothers should not feel alarmed. At this stage, your child may be feeling fewer hunger pangs. Mothers will also notice that their baby will start interacting with siblings and the environment, which is yet another sign of adaptation.

This is an important juncture in the life of a baby and parents. According to the guidelines of the American Academy of Pediatrics, you can introduce the first solid food to the baby after the fifth birthday. The food is often labeled as Stage-1 food because it’s a mix of fruit and liquid.

Experts recommend that mothers should only introduce one food at a time. It means that they can introduce one food per week and keep an eye on food allergies. The amount of Stage-1 food should not exceed one tablespoon because the purpose of food is to introduce different flavors to the child.

Mothers will also notice a sudden spike in milk craving as most babies will consume anywhere from 6 ounces to 8 ounces on a single feed. It is recommended to serve five times a day, which means feeding anywhere from 30 ounces to 40 ounces of milk daily.

The stage is set to introduce different foods to newborn babies. Mothers can breastfeed their babies 4 to 5 times a day depending on their appetite. Most babies will consume 7 to 8 ounces of milk at each serving, which is similar to the previous two to three months.

Mothers can start giving 1 to 2 tablespoons of Stage-1 food to their babies. They can also introduce one or two different types of fruits every day; however, make sure that the variety of food is kept to a minimum of 6 to 10 flavors.

At this stage, the newborn feeding schedule can include only 3 to 4 milk servings per day. The baby will likely consume 8 ounces on each serving. The decrease in milk consumption is the result of food intake.

It is recommended to feed 2 to 3 tablespoons of Stage-2 and Stage-3 food on a daily basis. You can also introduce different types of fruits, vegetables, and meat, which should be served twice a day.

Mothers should remember that they should never refuse to breastfeed the baby, when required. If the baby is hungry, it’s reasonable to forget about the amount of feed and the number of sessions. Just concentrate on feeding the baby because babies will let you know when they don’t want to feed anymore.