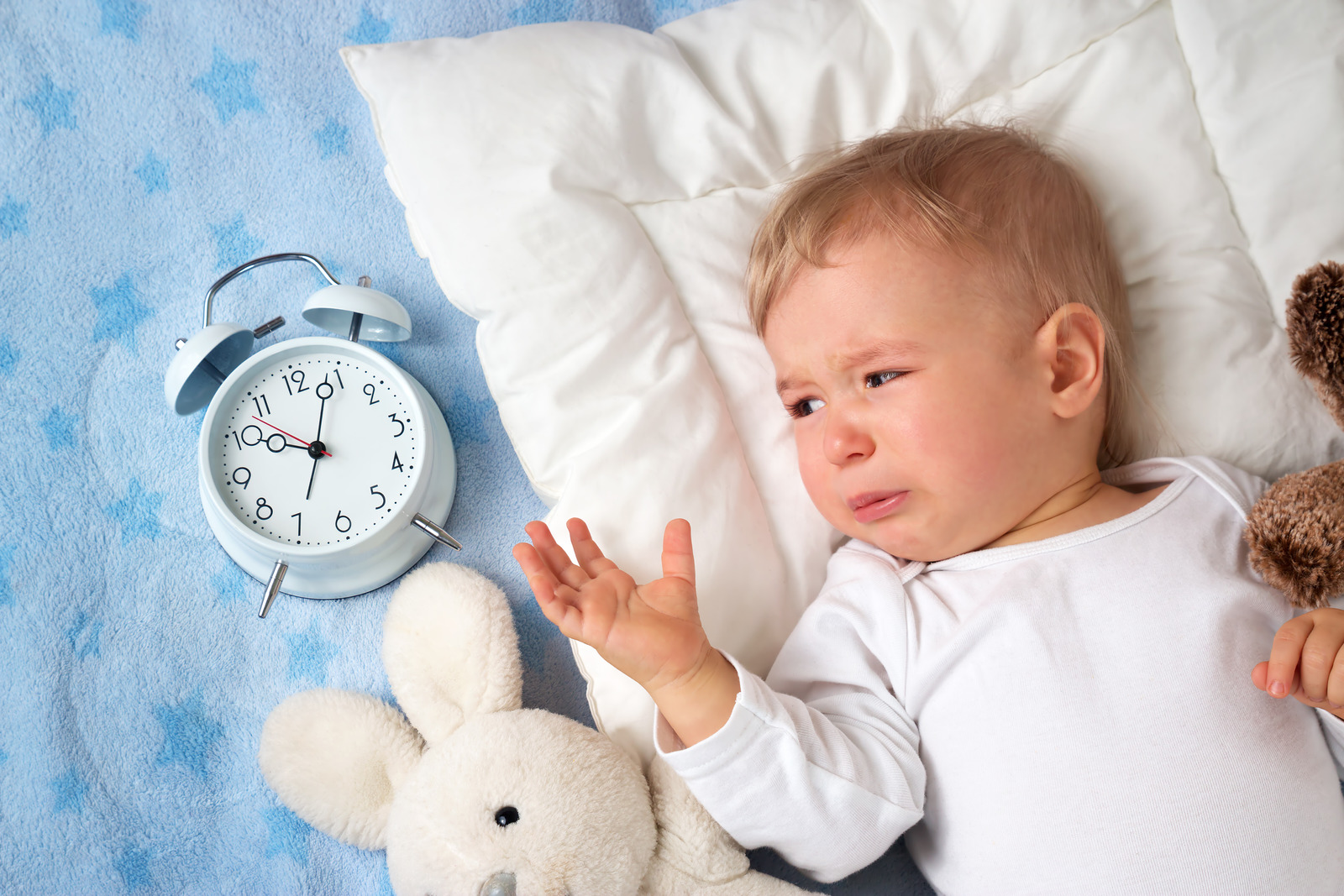 How Much is Your Baby Supposed to Sleep?

You may have heard that a baby will sleep a ton during the first year of life, but you probably also heard that parents are often sleep deprived those first twelve months. How can both of these statements be true?

It’s all about how the baby sleeps and what his sleep life looks like compared to an adult. The hours of sleep by age isn’t easy to understand as a new parent. Knowing the hours of sleep a baby gets by age helps parents know what to truly expect from the first year with an infant.

The First Quarter (Hours of sleep by age)

Watch for these sleep issues the first three months:

Due to his new existence on the outside of the womb, your baby will likely have his days and nights mixed up the first month of life. Expect your baby to sleep anywhere between 15 and 18 hours in a 24-hour period, but don’t expect the baby to do it all at once. Ideally, about eight to ten hours will be at night and the rest will be spread out over several naps throughout the day.

Remember that sleeping eight hours a night during the first month of life doesn’t mean your baby will, or should, sleep those eight hours without waking up. Babies have tiny stomachs that process food quickly, so your baby will wake up every two to three hours to eat.

The second month of your infant’s life will bring plenty of changes in her appearance and abilities, but the sleep situation will look much the same as it did the first month. Your infant may shave half an hour or so off of her overall sleep time, but still expect around eight to nine hours at night and at least three or four naps during the day.

If your baby suddenly starts waking up more often than normal at night for food or comfort, don’t worry. Sleep regression occurs in many babies during the second month. It’s a normal, if exhausting, stage. Try a pacifier to help your little one self-sooth and decrease the risk of sudden infant death syndrome(SIDS).

Welcome to the world of parenting an infant, not a newborn! This new phase may bring some sleep changes, such as the baby sleeping longer at night and taking shorter naps during the day. Night time feeding will still be necessary, but the frequency will lessen. Naps may also shorten, with the baby preferring one long nap buffered by two shorter naps on either side.

You will still notice your infant sleeping often, about 15 hours in a 24-hour period. However, 11-12 of those hours will be at night with the others sprinkled throughout the day.

The Second Quarter (Hours of sleep by age)

Here’s what to watch out for next:

Five straight hours of sleep is considered sleeping through the night for babies, and you may be experiencing this delight for the first time when your baby is around the four-month mark. Fourteen or fifteen hours a day is still the normal amount of hours to sleep for this age, but most of that will take place at night now. Two naps, usually one in the morning and one in the afternoon, will round out baby’s sleep needs.

It’s fair to expect at least one night feeding, but the fourth month often brings longer periods of sleep between this feeding for you and the baby.

Five months is the perfect time to start a bedtime routine if you haven’t already. Try a bath, a bedtime story, and some cuddles before placing the little one in his bassinet or crib. Some babies sleep for seven or eight hours without waking up at this age, while others still wake up sooner for a night time feed.

Two naps will continue during the day, and these may lengthen in duration. Try to have routines in place for naps as well so it will be easier for the baby to drift off to sleep without a fuss. Overall hours of sleep a day will remain about the same as the previous month.

If your baby hasn’t been sleeping for six to eight hour stretches at night, this may be the month he starts. A six-month old will often extend his hours of sleep at night and still keep two naps a day.

Don’t be surprised if you put your baby on his back to sleep and wake up to find him on his stomach. Though back sleeping is always recommended the first year of a baby’s life, your baby will likely be able to roll over on his own at this point.

The risk of sudden infant death syndrome(SIDS) is lower at six months than it is before, so don’t worry if this is the case. Still, put the baby on his back to start out the night and make sure there are no pillows, blankets, or stuffed animals in the crib with him. Fourteen hours combined sleep time is normal for a six month old.

The Third Quarter (hours of sleep by age)

The third quarter may bring:

The second quarter of your baby’s life could bring 10 to 11 hours of uninterrupted sleep a night. Be warned that every baby is different and not every one turns into a champion sleeper after the first six months. However, there are factors that may increase the amount of time your baby sleeps without waking up for food.

Solid foods have likely been introduced by month 7, and that means a baby will be full longer and not wake up for breast milk or formula as often. Two to three naps per day will likely still be necessary, and these will be a total of about four hours. Though the naps may feel like they are getting shorter, especially if your baby is still taking three a day, enjoy more peaceful sleep at night as a payoff.

Sleep regression often strikes again during the eighth month of a child’s life, so be prepared for the sleep schedule to feel completely thrown overboard. A child is acquiring so many news skills at this stage in the journey that the process may actually disrupt his rest. Separation anxiety also plays a role, and sometimes a child will wake up and cry just to see your face.

You can still expect the baby to sleep anywhere from 12 to 16 hours in a 24 hour period, with most of that still happening at night. Two naps during the day will round out his sleep needs, but those naps could be short or long. In fact, at this age the length of the naps may vary by the day.

Sleep regression fueled by separation anxiety or teething may seep into the ninth month of your infant’s life. Night sleep may not feel as uninterrupted as you hoped for, and this is usually the point in time when parents start looking for methods for handling late night cries. Your baby is probably still sleeping for nine to ten hours a night, but it will feel fragmented.

You may decide to let your baby self-sooth in the hopes that he will calm down faster, or you may want to check in every time he cries. Many parents choose to pat the child’s back instead of pick him up in hopes that he will fall back to sleep without getting out of the crib first.

A morning and afternoon nap are likely all the sleep your child needs during the day, and these add up to about three to five hours of nap sleep.

The Fourth Quarter (Hours of Sleep by Age)

The last quarter could offer:

Your baby may decide one nap is enough at around this age. He will add an extra hour or two to his nighttime rest and be awake more during the day to use his newly acquired motor skills and explore the world around him.

Other babies still want two naps, so they won’t sleep as long at night if those naps are both decent lengths of time. Either way, believe it or not, your almost one year old still spends a substantial part of the day asleep!

Regardless of how a child decides to split up his rest, he will still be sleeping about 14 hours a day.

Around this time, you may wake up to find your baby in the crawling or walking position in his crib. That’s because the last quarter of a baby’s first year brings all kinds of changes!

Your baby may be sleeping longer at night thanks to more movement during the day that exhausts him. He may be down to one long nap now instead of two shorter ones, but he will still sleep about 13-14 hours a day.

Congratulations! You have almost made it through the first year of your baby’s life. Whether he is sleeping peacefully through the night, napping once or twice a day, or still waking up for cuddles more than expected, the sleep situation should definitely be better than it was when you started.

Your baby will nap for years to come, and he will lessen how much sleep he needs a day, but he will likely still clock in at about 12-14 hours total in a 24 hour period. The sleep is supporting the growth and development you see happening every day.

previousFussy Baby at Night: What to Do
nextHow Do Babies Get Thrush?

4 thoughts on “Hours of Sleep by Age: Baby Sleep Guidelines”