Can I Give an Infant Baby Tylenol? 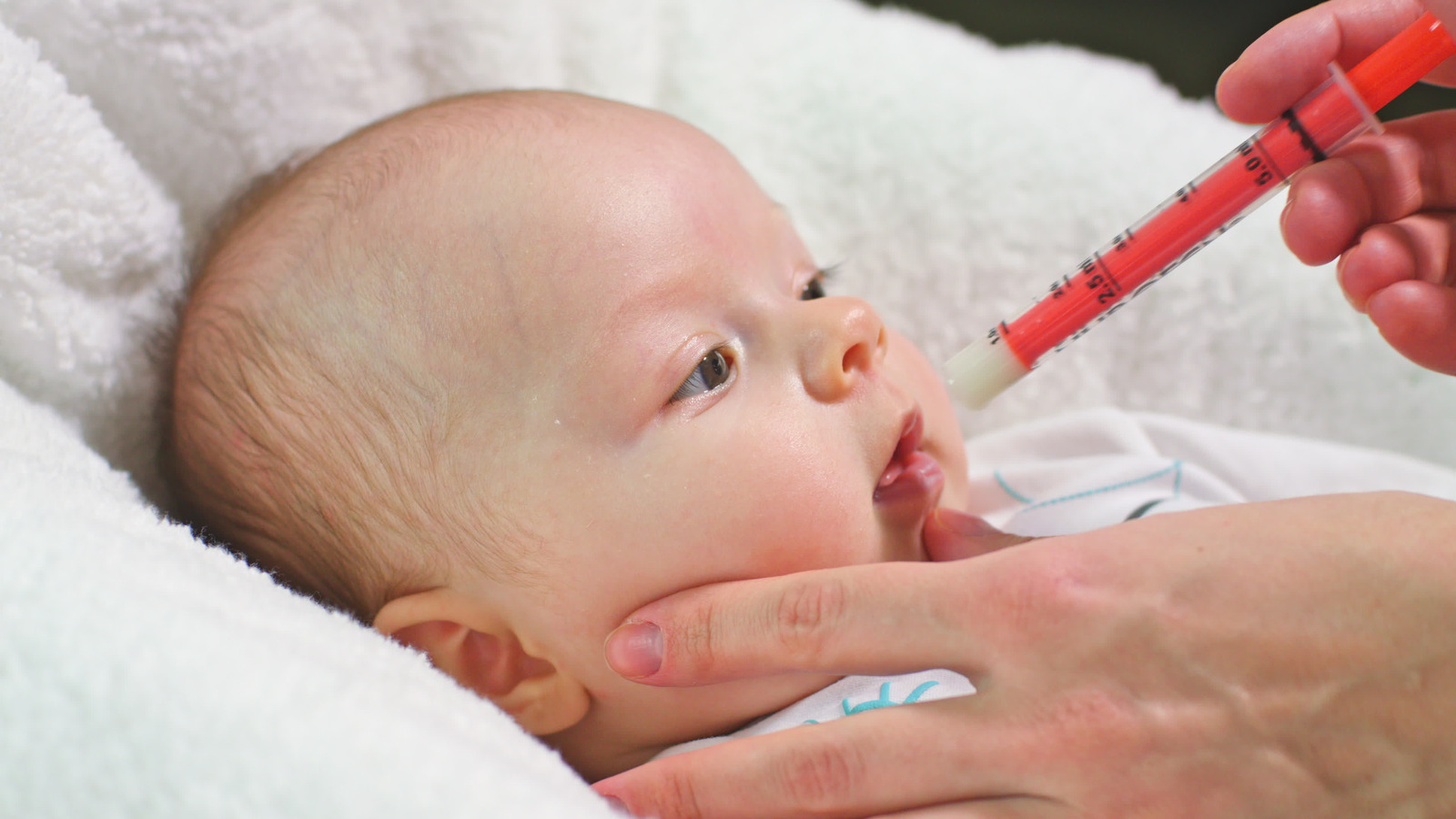 Is Tylenol Safe for Infants and Babies?

When you brought baby home from the hospital, you made sure that you had ample diapers, wipes, clothes, and blankets. However, did you think to stock baby’s medicine cabinet too? There will be plenty of times when you need to reach for a fever reducer, something to numb their gums, and drops to ease the pangs of gas. Consequently, many parents don’t realize that you cannot give your newborn the same medications that you take.

Sure, it would be easy enough to reach in the cabinet and give them a topical ointment for their gums, but the formula for adults is too potent for their little bodies to handle. Thankfully, giving infants Tylenol is one thing that is considered safe. However, though this medication is said to be harmless and a great way to reduce fevers and aches, if it’s not given in the proper doses, it can have distressing consequences.

Giving infants Tylenol is the same as giving them acetaminophen, which is the generic equivalent. It’s one of the most given medications to children under ten years of age, and with good reason. It’s safe for many uses, such as:

Tylenol is included in many products that are used over the counter. It can be found in things for colds and coughs as well as stronger versions of narcotics. While we think of this as a safe drug, if it’s given too frequently or in doses higher than what’s recommended, then it can be toxic to a baby. Giving infants Tylenol is safe, but only when given in the right amounts.

Why does something safe become toxic when given in higher doses? Well, it’s all because of the liver and its ability to filter. People ignore the instructions on the back of the bottle and give or take too much.

It’s imperative that you read the labels and never give more than what is recommended. Your baby’s tiny system cannot handle strengths in higher amounts than what has been tested. Don’t take their life into your hands by ignoring manufacturers guidelines. Here are some things you can do to ensure giving infants Tylenol is done right.

1. Use A Dosing Device

When it comes to giving infants Tylenol, almost all manufacturing companies put a dosing device with it. If your product doesn’t come with such a tool, then you need to use a medicine dropper or syringe. These measuring devices ensure that you are giving the correct amount to your baby.

Giving infants Tylenol can be tricky, and these handy tools make it easier. Never use a teaspoon from the kitchen drawer as the medicine can spill, and you may give them too much medication if you don’t do the conversion equation properly. Dosing instructions are in milligrams not teaspoons.

2. Check The Strength Of Your Medication

There are many different strengths of Tylenol that you can choose from at the store. If your child is under a certain age, then they will take a smaller dose than a child that is 12 years old. Don’t think that just because a bottle you bought for another child worked that you can use it on your infant. The dose can be just enough to be toxic to a baby. The Food and Drug Administration says that dosing confusion is the number one cause of toxicity in babies. Many dies because their liver shuts down due to the overwhelming presence of acetaminophen.

Double-dipping occurs when you give your child several medicines within a short period of time. While giving infants Tylenol is considered safe, and it can cause problems if you give them other medications too. Another issue is that a parent might give a child Tylenol for a fever, but they add a cough syrup to the mix. What they don’t see is that the cough syrup also has acetaminophen in it. By giving the child these two medications that seem harmless, and are formulated for baby, they are giving them a toxic cocktail. It’s the same as doubling the dose of Tylenol, and the repercussions could be deadly.

Because most dosing instructions are written in milligrams, it’s essential that you read the label very carefully. Not only are there one-time dosing instructions, but there are also daily limits that cannot be exceeded. Just because you give them the right dose each time doesn’t mean that you are not overdoing the daily allowance. It’s critical to get these amounts right. While you are trying to do the right thing and end the pain, you could cause a greater problem by not following the directions.

How do you spot the signs of an overdose of Tylenol in an infant? Usually, the child is fine after giving them the medication. In fact, they may not have any symptoms for up to 24 hours after they have received the toxic dose. After that period, you may notice the following symptoms:

After giving infants Tylenol, any parent that has any concern for their well being or safety should promptly seek medical help. Start by calling the poison control center. You may also call their pediatrician or if things are serious enough, then you need to take them to the emergency room for an evaluation. The sooner you get them treatment, the better the outcome. If the infant stops breathing, then call 911 as soon as possible. Grab all the medication bottles you used and take them to the hospital with you. The doctor will need to see what was given, so they know what course of action to take.

The doctor will need to gather a history of the dosages. This is where having the bottles comes in handy so that you can show them to the attending physician. They will conduct a physical examination and look for signs of liver failure. Their exam looks for:

Next, the doctor will conduct some blood tests. They need to see if the dose given was toxic to their body. Doctors can also order other tests that include a urine screen. They’ll need to get a clear picture of what they are dealing with before they start treatment. You may think the child is just sick from the problem that caused you to give acetaminophen originally. Many parents are shocked to find out that they’re giving infants Tylenol can cause so many problems.

The doctor needs to empty the contents of the stomach, but they can only do this if the dose was recent. After a certain period, they can no longer use this method. If caught early, then activated charcoal is the best way to get rid of the stomach’s contents. Depending on the age of the child, this may or may not be an option.

The other option doctors have is to use NAC or N-acetylcysteine. This medication is considered an antidote for Tylenol. If the child is too young and cannot take it by mouth, then the doctor can insert a tube to administer the medicine. An IV can also be used to give it too. This medication is given for around 24-70 hours after the toxic overdose. In extreme cases, a liver transplant may be needed.

Giving infants Tylenol is completely safe. It’s a great medication that works wonders to those in pain. Though this article goes into precise detail and shows what can happen in the event of an overdose, it’s just a gentle reminder that it’s imperative to read the label and heed the manufacturing company’s warnings.

Babies have such gentle systems, and what may not harm you can be deadly to them. Before giving infants Tylenol, take a few moments, and go over the dosing instructions and see what strength you have. If you have several children in the home, you could require a couple of different strengths. If you should mix these up, it could make your baby very sick. However, when it comes to fever-reducing, sore gum treating, general ache helper, acetaminophen is one of the best

Can I Give My Baby Tylenol?

It is not surprising for a person to rely on Tylenol for a mild sickness, but is it safe for a baby?

Is Tylenol Safe for My Baby?

You can rest easy knowing that giving Tylenol to a baby is not necessarily a bad thing. One thing to remember is that you need to pay close attention to the directions written on the medication.

You should also know that giving Tylenol to a baby is only okay if the baby is older than two months.

A sick baby is perhaps a parent’s worse nightmare because the child cannot tell you what is happening.

As a parent, you probably feel helpless and are itching to do something. However, this particular medication is not intended for a baby younger than two months. Before this age, the question “is it safe?” cannot only be answered with “no.”

If your baby is older than 2 months old, you can proceed with caution while giving Tylenol. However, there are a few things to keep in mind:

Giving Tylenol to a baby is okay as long as you pay attention to dosage because any miscalculation could lead to an overdose.

Pay attention to the following to get the dosage right:

Before you start giving your baby Tylenol, it is important that you figure out how many times you can do so throughout the day and how you are going to use the medication.

Remember, talking to your pediatrician before starting any medication is wise, but the label should help you figure out the frequency your baby is allowed to take this medication.

Keep the following in mind if you want to ensure that the answer to “is it safe to continue giving Tylenol to a baby?” remains the same:

You want to add an additional safety net when giving Tylenol to a baby for your own peace of mind and the overall safety of your child. The safety net you want is a list of qualified help. Before giving your baby Tylenol, make sure you have the following list of numbers:

You should keep in mind that giving Tylenol to a baby may be okay for a temporary illness, but your baby shouldn’t get sick all the time, so be sure to jot down how often your child gets sick.