Can I Give My Baby Skim Milk? 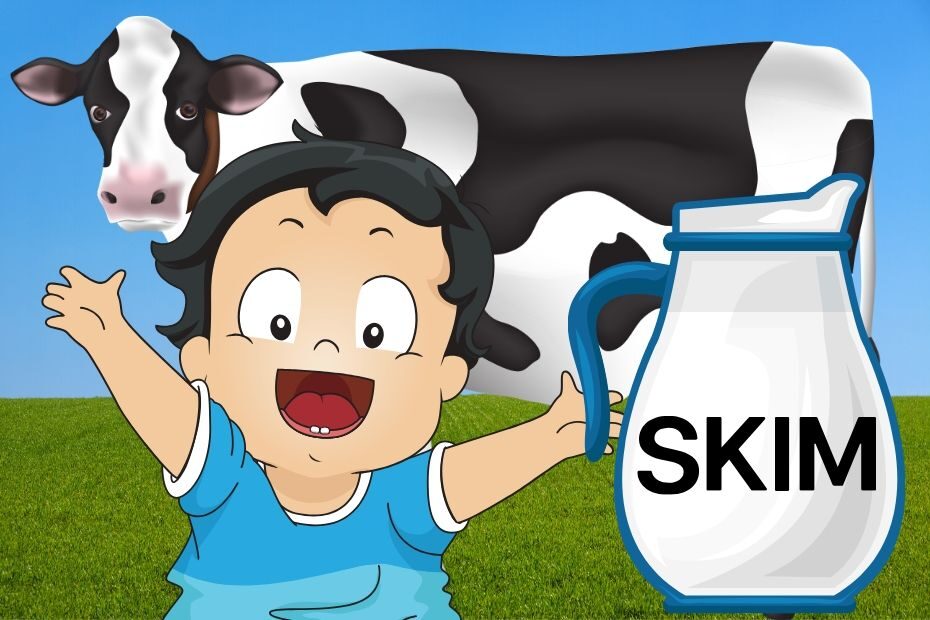 Can my baby drink skim milk?

This is a common question young mothers ask almost every day. Kids start consuming skim milk at some point though the bone of contention lies on when the consumption should begin.

Toddlers, though, require enough breast milk for at least one year or beyond. Denying the baby breast milk will not only inhibit proper growth and development but also compromise the immunity system. Below are factors you should consider before giving your baby skim milk.

However, pinpointing the exact milk to offer the baby can be challenging. Though skim milk is okay with adults or older babies, it may not be recommendable for 1-year old toddlers. Before introducing your baby to any milk, get professional advice from a pediatrician to avoid complications.

As young as they are, sometimes babies experience allergies when introduced to skim milk or any variety of cow’s milk. When your baby has an allergy to cow’s milk, the body overreacts to proteins in cow’s milk.

Identifying whether your baby is allergic to milk should not be hard. Most baby formulas contain milk, which triggers allergic reactions a few weeks after the baby starts consuming. Though anyone is prone to allergic reactions, it’s more common in toddlers.

When you notice your baby is experiencing some allergic reactions, stop with the milk. You can also stand guard with epinephrine auto-injectors in case a severe reaction occurs.

Look out for digestion complications.

Cow’s milk contains high levels of minerals and proteins, which can stress your baby’s digestive system. The milk can cause severe sickness in times of fever, diarrhea, and heat stress.

When the timing is right, your baby needs approximately 3.5 to 3.8 percent of fat. Whole milk generously contains these fats, which are beneficial to toddlers between 12 to 24 months.

During this period, babies require high-fat content to promote rapid physical and brain growth. Energy and growth requirements at this time will require more percentage of fat, which is absent in skim milk. At such a time, nutritionists recommend whole milk until the age of two.

Check for obesity and weight problems.

Unfortunately, babies also face the risk of being obese or overweight. Sadly, the deadly duo can cause complications spanning from heart attacks to high blood pressure.

However, most babies likely to be obese and overweight have a strong family history of such conditions. So, as a parent, when you notice such traits from your baby, consult a pediatrician or a nutritionist.

It is only after involving professionals that you should reduce the amounts of fat in the diet. Skim milk is an ideal choice in such a scenario.

When the baby is all grown, it becomes a challenge to choose between skim and whole milk. Switching to whole milk is not hard for most parents as they already know it should happen after the first birthday.

However, the challenge lies in when to switch from whole milk to skim milk. Though both have different nutritional values, they come in at different stages. According to pediatricians, whole milk is an option after the baby ceases to breastfeed and no longer on baby formulas.

Whole milk has a better taste, unlike low-fat milk. If your baby, for any reason, refuses to drink milk, consider using whole milk. Babies who are also free from obesity and overweight issues, but picky eaters can consume whole milk.

Although pediatricians might vouch for whole milk for non-obese toddlers, switching to skim milk after two years is advisable. By now, you might be wondering if the two have significant differences if at all it exists.

Milk that is 1 and 2% whole milk contains 100 and 120 calories, respectively. The fat content in both kinds of milk is 2.5 and 4.5 grams, respectively. So, if your child switches from whole milk to 1% milk, he/she is likely to save a considerable amount of calories per day.

The same effect applies to young babies, which explains why toddlers having weight issues drink low-fat milk. Although the figures above might not look alarming, it’s advisable to regulate the amount of whole milk your baby drinks.

So, what milk is right for your baby?

Currently, there’s ongoing research regarding milk fat and its relation to obesity in babies. The latest research findings indicate that low-fat milk is not likely to reduce obesity risks.

However, according to current recommendations from (AAP), your toddler should switch to whole milk after 12 months. Afterward, change the diet to skim milk at two years. It is, however, recommendable to make the switch earlier if the bay is already overweight.

Making the switch early is easy as it reduces the probability of the baby refusing skim milk. Even with young babies, a gradual switch from 2% whole milk to 1% and eventually skim milk is possible.

Making an early switch is also likely to influence your baby’s healthy tendencies in the future. As the baby grows, the likelihood of drinking low-fat milk even as a teen is high.

Fortunately, if your 2-year old baby is lactose intolerant, there are other options on the table. Soy milk, rice milk, and almond milk are readily available, which luckily have low-fat contents.

Identifying the correct time to introduce milk can be challenging. It becomes even harder when choosing between the milk varieties. Before making the bold move of giving your baby milk, it is important to understand the factors at play. The information above will guide you on timings and how each type affects your baby.