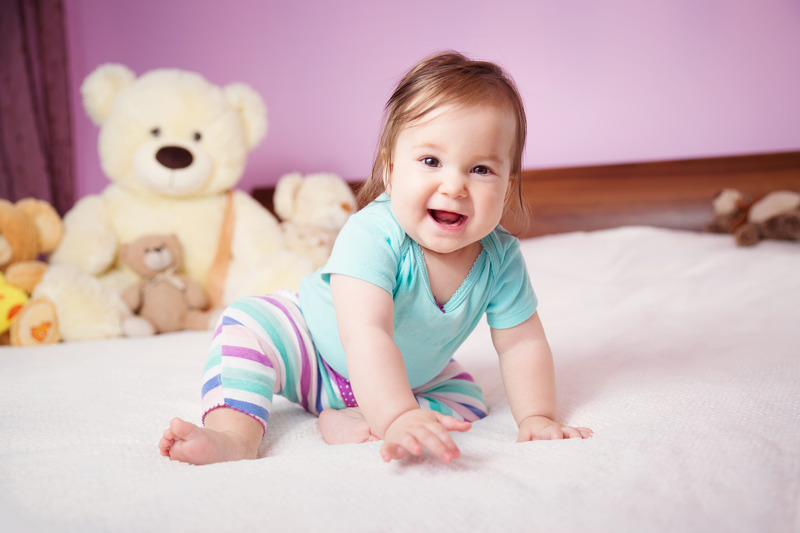 Your 8 month old’s motor skills are developing at a frantic pace. Muscles are growing in their neck, shoulders, back, legs, and hands in a way that allows them to interact with their world more closely. By this age, they can reach out and touch, grasp, or even hold objects. They’re mimicking smiles and frowns and other facial expressions that parents, friends, and other children might display in front of them. And they’re able to do so much more than they could do even a short month ago.

All of these changes are coming about thanks to those new motor skills, with a combination of muscle growth and greater strides forward in coordination. Some babies will celebrate some milestones earlier than others. For example, here are just a few of the things that your baby might already be doing by 8 months:

Object permanence is an important thing for babies to learn, and by 8 months old, your baby will learn the concept of object permanence, an accomplishment whereby your baby learns that even when you’re not in the room, you still exist. Before they learned object permanence, they believed that out of sight was out of existence. You simply weren’t there anymore. Now that they know you still exist when they don’t see you, they may develop new separation anxiety problems because when they’re trying to sleep, they’re aware that you’re still out there somewhere. Don’t worry! Expect this type of anxiety to go away sometime around the 2 year mark. It’s not forever.

By the time you reach the 8 month old baby milestones, your little one should be able to eat an increasing variety of solid foods. These little meals will make up some of your largest memories later on, as baby’s first favorite foods are always a hit in the nostalgia department. Fruits, vegetables, and baby cereals will all make an appearance, as will well-known mashed baby food meals. Each one of these foods are eaten in addition to ongoing breast milk or formula feeding. The ability to eat new foods ranks high on the list of most important 8 month old baby milestones. Your baby can try finger foods, too.

3. Cause and effect awareness

For the longest time, babies don’t have any sense of cause and effects actions. For example, if they drop something, they don’t understand the relation it has to you picking the object up. By the time they’re 8 months old, babies hit a very important one of the 8 month old baby milestones. They realize that when X happens, Y is the effect. Of course, this might mean a lot of fun, or frustration, for you, depending on whether or not your baby is amused by dropping things and watching you pick them up! Whatever comes of the cause and effect awareness should make life more interesting in your household for quite some time.

Very young babies don’t really know what they like one way or another. It’s all about the basics of survival. They eat. They sleep. By the time they reach 8 month old baby milestones, your baby will have a growing awareness of what they do or do not like. And you may see correlating smiles or frowns depending on whether or not a like or dislike it in front of them. For example, if they love baby cereal, they’ll have a big wide smile on their face when you bring them some. If they hate it, they may frown. That’s your baby expanding their emotional and mental awareness of what they do or do not like in this world, and it’s precious.

Who doesn’t love the sweet, gentle coos and babbles of baby talk? Your 8 month old baby milestones will include a healthy dose of said babbling. They’ll perhaps throw out old favorites like “ma-ma” and “da-da” babbles. They’ll know the meaning of basic words, such as bye. Imagine the exciting new world of language that your baby is learning during this critical period in life. Not only are they starting to learn what the words in general mean, but they can also throw out those words on their own, with their newly formed language skills. Among all the 8 month old baby milestones, the words your baby will babble perhaps make them closest to you. Now they’re entering the human world of language, and it’s beautiful.

Before 8 months of age, few babies recognize familiar faces. They of course enjoy the company of those people, and they respond when they’re around, but recognizing them is something they’re not entirely capable of until about 8 months of age. This 8 month old baby milestones moment means that when you come home and your baby sees your face, they know it’s you! And your baby will recognize other familiar faces as well, even those of friends who might visit the household. This little milestone is a fulfilling one for the whole family and for baby, as you know that your little one knows the people around them better than ever before.

8 month old baby milestones are some of the most memorable of their childhood. Your baby’s brain is developing quickly, learning to coordinate with the body in a way that was previously foreign or even impossible to them. They recognize faces, babble out coos and mini-words, and begin to develop a whole realm of likes and dislikes about their world. It’s a more human time for your little baby, as they grow into the human world that they were born into. The human world certainly appreciates their achievements, too, and celebrates them via social media, baby books, and pictures.

Vital to your future toddler

At 8 months old, the world of babyhood is still very much alive, and your baby isn’t quite in the world of toddlerhood yet, but they’re learning the tools they need to become a full-fledged toddler in the near future. They’re not only learning about their environment and the faces they see, but they’re now strong enough to reach out and touch things in that world, grasp them, and even hold them at times. It’s a whole new ballgame for parents at this age, as their once immobile babies begin to learn to crawl and roll over.

Don’t Compare Your Baby With Others

8 month old baby milestones are often shared on social media, and parents sometimes compare their own child’s progress to those of other babies. It’s important to remember that all babies develop at a different pace, and just because your child might learn to crawl a month later than another child doesn’t mean that they’re slow or going to miss out on higher education or fail at life. It just means that their body’s blueprint and their brain’s blueprint is different than any other babies. They develop at their own pace.